George Lucas changed the world in 1977 when he unleashed the epic Star Wars franchise upon us.

Since then, Star Wars has become one of the most popular movie franchises of all time, making Star Wars chessboards a tough commodity to come by.

Star Wars has boasted unwavering popularity throughout the years following the release of Episode IV: A New Hope. Despite the want for Star Wars merchandise, it’s a rarity to come across chessboards or games inspired by our favorite work of science fiction.

After searching far and wide, we found two classic sets that we love. Fans can also find handmade and novelty Star Wars chess sets for sale thanks to some craftier fans all over the world.

Our first entry into the list of officially licensed Star Wars chess sets is Hasbro’s famous Star Wars Saga Edition Chess Set. Hasbro has years of experience manufacturing some of the best quality board games and toys, so we have high expectations for this set.

All the characters are exquisitely detailed. They are easily some of the most dramatic and detailed sculpts we’ve seen in a long time, giving the board a feeling of energy and liveliness.

Our first issue with this chess set is the material, though. Unfortunately, the pieces are sculpted from semi-hard plastic, which can look a bit cheap.

The plastic Star Wars characters have a limited lifetime if you play with this chess set daily. For instance, the lightsabers are bendable, and you need to be careful when playing that they don’t snap off, leaving your Jedi utterly defenseless.

The pieces are also a great size: they average around 3 inches. The board is slightly too small for the chess pieces, and you’ll have to take care when moving them around.

For beginners or kids, this is an excellent purchase and one of the best chess sets on the market today. 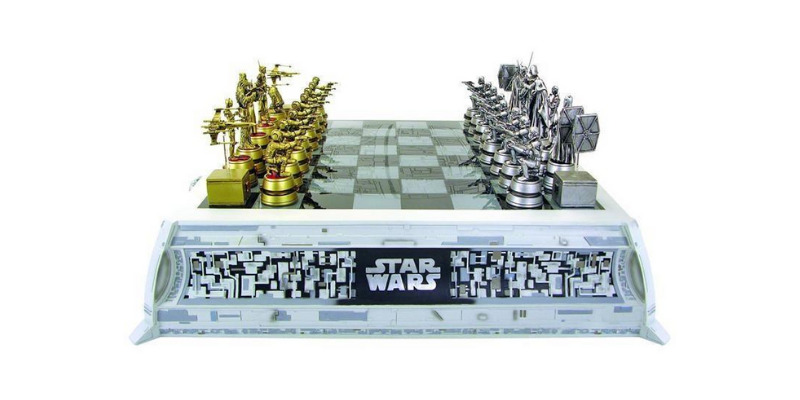 Our next entry in the Star Wars-themed chess sets is aimed at the serious collector that loves the franchise.

Gentle Giant is known for providing fans with fantastic collectibles based on comics and movies. This game board will go well with any other Star Wars merchandise you’ve no doubt got stashed away.

This Star Wars chess set has pieces manufactured from more durable pewter. When you pick up a piece, you can feel it’s solid and built to last. The 32 pewter characters are highly detailed and move smoothly across the glass etched top.

There’s a detailed drawing of the Death Star on the glass top that will thrill hardcore Star Wars fans, no matter if you support the light side or the dark side of the force.

The aesthetics aren’t limited to the characters. There’s an impressive raised board with countless Star Wars-related details on it. This Star Wars chess game comes with a handy box to store your characters in.

Our only complaint is the golden color. A simple dark and silver scheme would have gone a long way to convey better the struggle between the light and dark sides of the Force.

This board is perfect for serious fans that also love the occasional classic game of chess. It’s a great collector’s item that chess players will love. 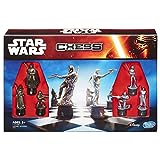 The Star Wars Chess Set is a great all-around choice for young Padawans to the most powerful Jedi Masters. The set is ideal for children and family game nights.

It can also work as a novelty gift, for players looking for a budget-friendly themed set, or any Star Wars fan. Hasbro is one of the biggest board game manufacturers in the world, making the set relatively inexpensive and easy to find.

The full 32-piece Star Wars chess set comes with a cardboard chessboard. The black and silver plastic game pieces are modeled after the movie characters, as well as their respective attachable bases.

Players can either join the Alliance, with silver game pieces representing their favorite rebels, or join the dark side and use the highly-detailed black Imperial Army pieces.

For classic chess lovers, the characters are marked with the symbol of the standard chessmen that they represent to eliminate any possible confusion while playing the game.

While it may not be the most durable Star Wars chess set, it has great novelty value. Despite the set’s overall quality, its functionality and intricate details still make it one of our top picks for any Jedi in training. 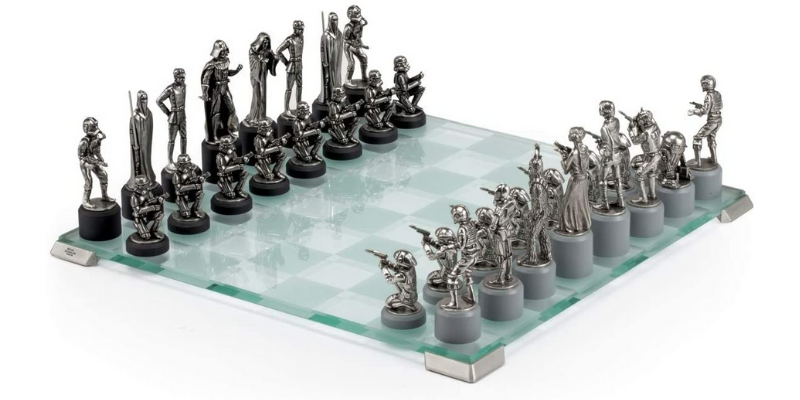 This is the chess set you’re looking for.

The set is sold as the official Star Wars collectible chess set by Disney and it’s available in Disney’s online store. This collector’s item is made from high-quality pewter and comes with a tempered glass chessboard.

The solid metal chess pieces have meticulous attention to detail which really brings the characters to life during play. Similarly, the board comes with satin-finished feet and each chess piece comes on a porcelain plinth to give the set an overall premium feel.

Ideal for die-hard fans and collectors alike, the Star Wars Classic Chess set is produced as part of the Lucasfilm Collection by Royal Selangor. One of the amazing features of the low-maintenance pewter chess pieces is that they won’t tarnish or oxidize, so your set will last you for years to come.

There’s no need to travel to a galaxy far, far away to find the best Star Wars-themed chessboards around. We reviewed something for everyone, from a board fit for the esteemed collector to a board game that’s perfect for introducing kids to the joys of chess.

With the ongoing success of the Star Wars franchise, it’s hard for us to believe that there aren’t more Star Wars chess sets on the market.

Whether you love the original trilogy or the newer movies, you’ll have more fun playing chess from this Star Wars collection. Choose to be Luke Skywalker or Darth Vader: The force will be with you – or not.