Look back over the past, with its changing empires that rose and fell, and you can foresee the future, too.

Today, we explore a little piece of history and transport ourselves back to ancient Rome.

Don your Roman armor as we make our move and unbox our selection of the best Roman chess sets around. 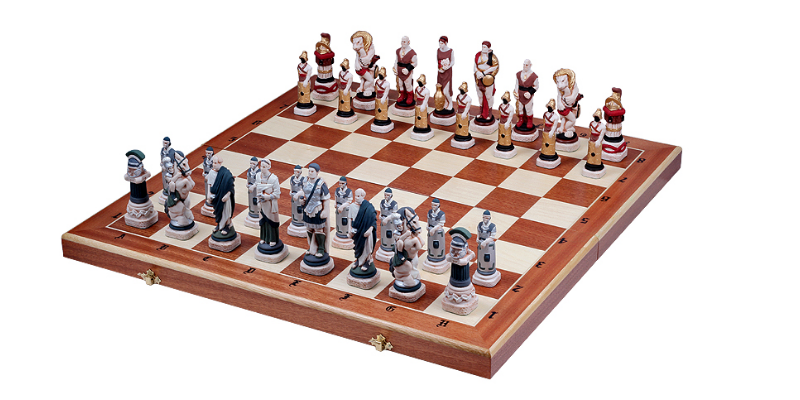 Take on the might of the Roman empire or attempt to crush the slave rebellion with the Spartacus Themed Chess Set from Lion Chess.

Each piece in this set is hand-painted and made from ground marble. Dramatic facial expressions and poses are forever captured in stone, showcasing the glory and savagery of the Roman era.

The marble ensures that the roman chess pieces last a long time. The pieces are solid and weighty.

Julius Caesar, the king, stands at 5¼ inches tall, while the slaves, our pawn pieces, are around 3 ½ inches tall. This added king weight and height should get Julius Caesar checkmating Spartacus in no time.

The chessboard pits Julias Caesar against Spartacus, the two kings, across a comfortably-sized, 23-inch oak wood chessboard with 2½ inch squares.

This chessboard also serves as a handy chess case. With a clever folding mechanism, chess players can pack up their pieces into individually padded slots and later unfold the board when they want to play.

The set weighs around 5 pounds, making it cumbersome. You may end up working your muscles as much as your brain if you want to move this set from room to room, or your local chess club. 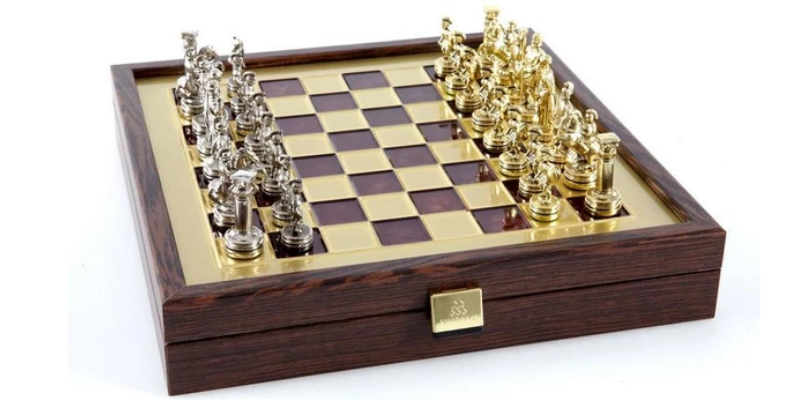 Neighbors, but not always friends, this chess set from Chess House is based on the historical clashes between the Roman empire and the brave Greeks. Players get to reenact some of the best strategic battles in history on an impressive brass chessboard.

While this board is on the smaller side, the red inlays contrast the rich gold pleasingly. It creates an impressive and stylish finish that will impress serious chess lovers.

The impressiveness doesn’t end there, though. Each of the traditional chess pieces has carefully been designed to look fierce and dramatic. Tiny details can be seen on the Roman armor fixed to the pawns. At the same time, the king and queen look noble and stately.

All the pieces are manufactured from a durable zinc alloy which makes this chess set one of the hardiest we’ve reviewed. If you detest the sound of metal clashing, you’ll be glad to know that the chessmen are padded with felt for quiet gameplay.

Players also get a gorgeous and handy laminated wood storage box for taking their favorite chessboard on the go for a quick game at almost any place. 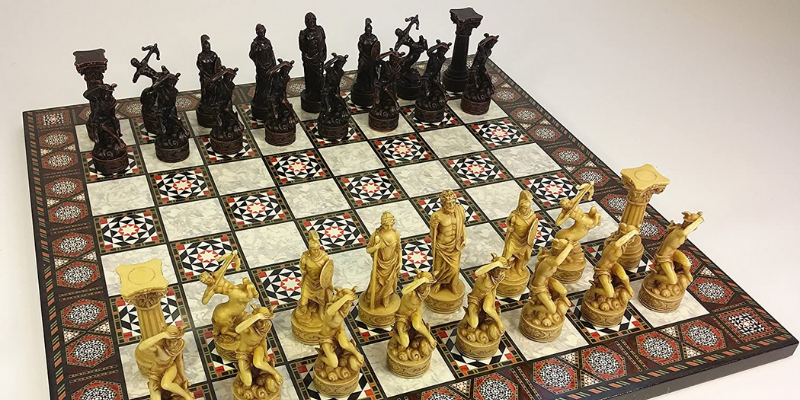 Our next option gets a little more mythological than historical. This fantastic Greek Roman chess set proudly displays famous figures from the pantheon of ancient Greek and Roman gods and legends.

You could easily spend hours transfixed on the various characters trying to identify who’s who in your army.

The rooks are grand Doric columns, the knights rearing centaurs with taut bows. There’s been considerable debate in our office over whether the king and queen pieces are Zeus and Hera or Jupiter and Juno, but that’s probably an argument best left for actual historians.

The pieces are made from a durable cast resin and they’re hand-painted, giving them an air of authenticity and making them look like classic works of sculpture.

The board is just as impressive. It’s made from a glossy laminate that’s stuck firmly onto the storage case below. This gives it an almost marble-like appearance, which is fitting with the theme.

While we love the design of the set, there’s always room for improvement. If the board is exposed to moisture, it’s likely that the laminate will start peeling, which could render the whole set a little useless. The pieces are also brittle. While they’re not likely to chip or scratch thanks to their dense makeup, they could break if they’re dropped from a height.

On the other hand, a storage drawer has been built into the case, so you can make sure all your pieces are kept safe and secure whenever you’re not playing. 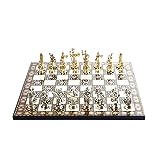 At first glance, you’d be forgiven for mistaking this for some display of art rather than a chess set.

The first thing you’re likely to see is the mosaic chessboard jumping out at you from across the room. While this might appear asynchronistic with the theme, it’s actually a close resemblance with the designs that would have adorned the homes and bathhouses of Roman nobles at the time.

The pieces are made of cast metal and come in yellow and silver finishes. We see why the designers went this route, but we honestly would have preferred the standard black and white to help the pieces stand out against each other.

It’s not all bad though. The pieces themselves are excellently made, and you can feel how durable and weighty they are in your hand.

The pawns are your standard Roman centurion, but the backline gets a little more interesting. The rooks are represented as obelisks with carved reliefs, reminiscent of Roman-occupied Egypt under Cleopatra.

Other famous figures like Julius and August Caeser also make an appearance, and we’ll leave it to you to figure out which one is the king.

You can also rest easy knowing that your investment isn’t going to get damaged or tarnished easily. The board is protected by three layers of varnish, guarding it against chips and scratches. 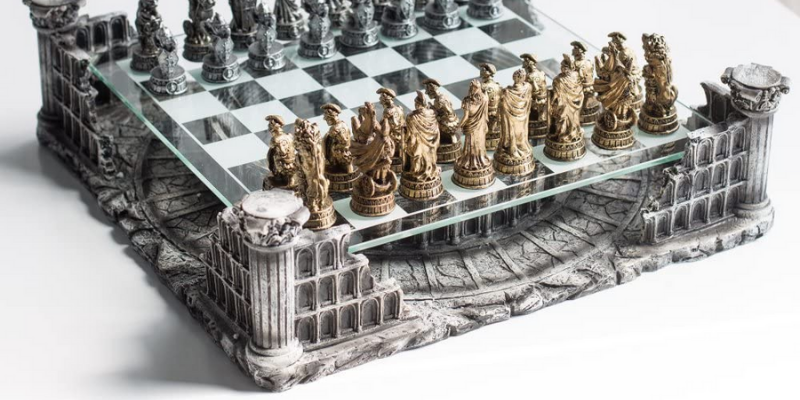 This is our pièce de résistance.

The first thing you’ll need when you set up the 3D Gladiator chess set is a stable surface, as the set weighs over 12 pounds.

A frosted glass chessboard is suspended over a 3D colosseum, over which sit 32 expertly crafted chess pieces. The gladiator-theme carries across strongly as each piece is styled in typical gladiatorial regalia. The rooks are adorned with terrifying lion headdresses and the bishops are represented as the elite pretorian guard.

The pieces are made from high-quality resin. While this gives them plenty of detail so each piece stands out, it has the unfortunate side effect of making them quite brittle, so you should ensure to handle this set with care.

Another drawback of the set is its eye-watering price. It’s undoubtedly beautiful, but that doesn’t make the nearly $400 price tag any less shocking. Still, if you’re okay with spending a month’s rent on a chess set, it might as well be this one.

Both of these Roman chess sets look grand in either your office or lounge and keep players entertained for years to come.

Choose your favorite Roman chess set and let it transport you back into history where you can battle like powerful and famous rulers.