If you love chess as much as you love LEGO, you’ve probably seen the 40158 Pirates Chess Set. This fun set includes pirates and bluecoats to set itself apart from classic-game chess. We’ve put together this LEGO Pirates Chess Set review to show you why this is a great choice for all ages.

Strategies play out in cunning moves to outmaneuver your opponents. Imagination takes hold as colors and characters come to life in this fun beach-themed board and chess set.

Here’s the low-down on what to expect from this limited edition LEGO iconic chess set and their take on this classic strategy game.

We’ve played with a few LEGO chess sets in our lives. So, we were interested to see how this one weighed up against its counterparts.

The 875 piece count comes together to create a lively LEGO chessboard with simple knob configurations. The different mini-figures are well done, and if you’re a LEGO fan these are a great addition to your LEGO collection.

It’s easy to build but it can be a bit of a pain having to set up all the pieces every time you want to play. Why? Simply because they’re LEGO pieces and have to be stuck back into place.

We love the storage capability of the LEGO chess set though, which keeps all your pieces safely locked away.

The brick-built chessboard measures 16 x 16-inches. It’s simple to set up and results in a grid of black and white tiles. This is flanked by two scenes: a portion of a fort on one side, and a beach on the other.

We found building up the tiles to form the chessboard rather tedious. But the instructions are clear, and when you get through this part the fun can begin. You need to be careful when moving the chessmen that bits of the board don’t come away with them.

The base plates are a great addition to your child’s LEGO collection as they can be used as the base of any fantasy scene they want to build. (We won’t judge you if you are the one who has the LEGO collection – we do too.)

The 20 figures are definitely the highlight of this LEGO chess set. It’s impressive that they filled the pack with so many minifigures that are brightly colored with awesome printing on the front and back.

On the pirate side, the pawns are a motley crew of ruffians in two variations of torsos, faces, and bandanas. The Bluecoats are a little less interesting, each having the same uniform look: one uniform, white pants, and generic “city” hair. This is to be expected from an army of soldiers in a real-life situation.

The pirate rooks are barrels, with parrots perched on a flagpole. And the Bluecoats sadly don’t impress either, being some odd type of pillar.

From here, however, things start to get more interesting. The pirate knights are skulls, with the soldier knights are nautical maps on pedestals. The bishops stand their ground as catapults in the pirate crew, and a weapons rack with a telescope and cutlass in the Bluecoat army.

The royals are a regal affair, with the queens sitting high and mighty on elevated armchairs. The pirate queen is a bit of a rehash from the 70411 Treasure Island LEGO Chess Set, with the same face and hairpiece. It would have been nice to see a more thorough overhauling of their old pieces rather than getting them repackaged. 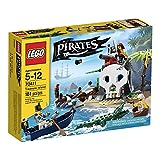 We weren’t too impressed with the Bluecoat queen who really looks more like a damsel in distress than a fierce fighter.

That being said, the queens have double-sided faces which are quite fun. One side shows a smile, and the other is a ready-for-battle grimace.

The pirate king is great, with a rare torso which we’ve only seen in the Classic Pirate and Imperial chess sets. The Bluecoat king is a commanding admiral, closing off the set nicely.

We have to make a special note of the “joke” pieces, which add to the fun of the set. One pirate character is armed with a banana instead of a cutlass, and he looks appropriately terrified. One soldier is a happy-go-lucky fellow wielding a baguette. Banana sandwich anyone?

The secret storage capability is one of the best surprises. The chessboard opens up to reveal a cavity where the pieces can be safely stored so none of them get lost. This also halves the space that the set takes up when not in use.

Since there are so many pieces, having extra storage is a huge help.

This pirates’ chess set delivers entertainment value on multiple levels. Building it is probably the most boring of the three, unless you’re really into brick-laying.

Then there’s playing chess with your opponent. While the pirates versus Bluecoats theme is great, moving the actual chessmen can prove frustrating. Because, well, they’re LEGO pieces and they stick to the board. A timed chess game is probably not a good choice.

The game can get a bit confusing at times because in the fray of chess battle some of the pieces do look similar. While this might add to the sense of immersion of a real-life battle, it’s not ideal.

However, the greatest entertainment value of this set must be for the kids, who will see it as more than just a pirates’ chess set. They can take it apart and build it up again into all kinds of different scenes, and have their own (non-chess) games of pirates versus soldiers. Mix it in with other pieces of LEGO that they have in their collections, and a whole new story unfolds.

While this is an official LEGO product, the set is available at an affordable price. There are also second-hand chess sets available for purchase, which are even easier on the pocket.

The retail price of this LEGO pirates’ set will cost you around $160 at your average shop. The price is quite steep, but that’s what it takes to secure the LEGO group’s copyright. It’s still cheaper than most LEGO sets, some of which can get over $2000.

You’re paying more for the LEGO logo than the plastic in the box, and it’s come down significantly since LEGO released the set.

All in all, we were impressed with this LEGO chess set. It appeals to people of all ages and stages of life.

There’s a type of nostalgia for pirates – we’ve all come across stories about them at some point. So you can live the legends in a fantasy-filled battle between the cutthroat ruffians of the sea, and the fierce regimented soldiers on land.

It’s a great way to spend time with the kids, teaching them how to play chess. Or just let your imagination take hold and play pirates and army building with the many assorted weapons and figurines.

Unfortunately, the LEGO group is retiring the set so whatever stock is available now is the last of it. If you’re keen to get your hands on the 40158 Pirates Chess Set, time is of the essence. Some countries are already sold out, so you may need to change the region to get your hands on one.