Grab your train ticket and your list of supplies because the school year is about to begin. All young witches and wizards require three pairs of black robes, a wand, a cauldron, and… a chess set?

Okay, so maybe a chess set isn’t on the official list for Hogwarts students, but it is on ours.

If you’re just as obsessed with the magic and mystery of the Wizarding World as we are, put on your robes and ready your wands, because we’re going on a journey to find the best Harry Potter wizard chess set there is. 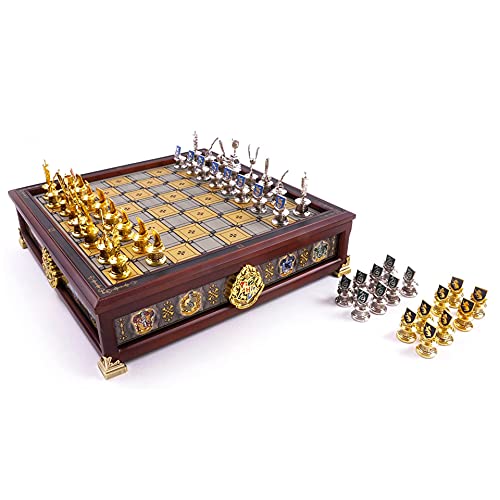 Cleverly designed to replicate the game of Quidditch, this is our favorite of all Harry Potter chess sets on this list. Choose your team and play to win.

If you’ve ever dreamt of joining your favorite characters on the Quidditch pitch, you’re not alone. The fantastical sport excited Harry Potter fans since seeing him mount his Nimbus 2000 for his first match.

While you’re still waiting for your Hogwarts acceptance letter, you can pass the time and show your house pride with Noble Collection’s Harry Potter Quidditch chess set.

The set comes with four groups of pieces that represent each of the Hogwarts houses so that you can lead your house’s team to victory and earn the coveted Quidditch cup. The pieces are die-cast and the pawns are beautifully decorated with colored enamel sigils that correlate to their respective house.

One of the most exciting parts of the set is the chessmen that make up the back row of the board. The game pieces allow you to fully immerse yourself in the Quidditch theme, with rooks shaped like spectator podiums, bishops in the shape of beater’s bats, and brooms that represent your knights.

The object of the game is to catch the Golden Snitch (the queen) and ultimately win the House Cup, which in this case represents the king. Okay, the rules get a little blurry, but it makes a nice change from the usual Harry Potter chess sets.

The set is just as beautiful as it is functional with an ornate hardwood board. All four sides are embellished with 24k Gold Hogwarts crest and the Hogwarts school emblem.

The 12-inch board is foldable for portability and easy storage, although we think that its eye-catching design deserves to be put on display in between games. 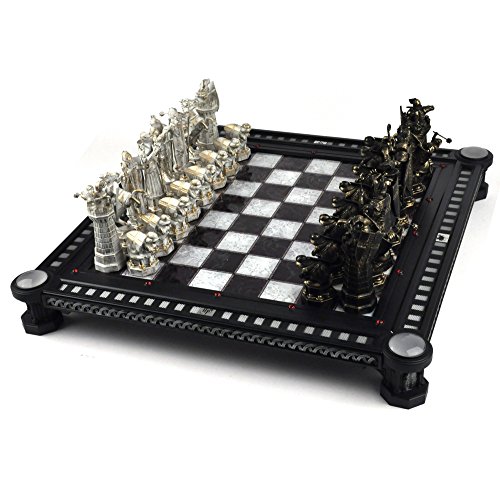 From detailed pieced to plexiglass board the Final Challenge Chess set is our top choice for best quality set. Inspired by Harry Potter and the Sorcerer’s Stone.

Every Harry Potter fan remembers sitting on the edge of their seat during the larger-than-life chess match in Harry Potter and the Sorcerer’s Stone. The Final Challenge Chess Set perfectly captures the scene and boasts some of the most accurate replicas of the iconic enchanted chessmen.

The pieces are highly detailed and have been die-cast from zinc, giving them a weighty feel without being too heavy. Just like the movies, the pieces are oversized, with the king standing at a towering 5.5 inches.

The pieces tend to overlap the squares on the 20-inch plexiglass board during gameplay, although this is easily forgiven considering the quality and durability of the set.

The set is expertly crafted and authorized by Warner Brothers and is easily considered a coveted collector’s item. This means that the set is a little pricier than some of the others on the market.

If you’re looking for a more budget-friendly option, Noble Collection’s Wizard’s Chess Set is just as detailed. The lower price does mean that the set is made of cheaper materials, though, and comes with a cardboard chess board and plastic pieces. 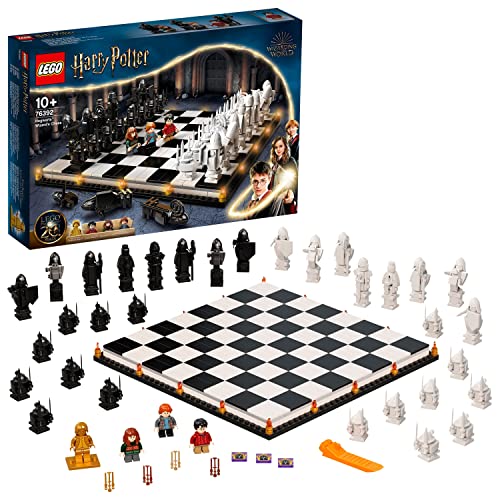 Build and play with this LEGO Harry Potter chess set created to celebrate the 20-year anniversary of Harry Potter. Fun for both kids and adults.

Grab your butterbeer and get ready to settle in, because LEGO’s Wizard’s chess set promises you hours of fun. A perfect 2-in-1, the set comes with 876 pieces that let you build your set before you play. And who doesn’t love building with LEGO?

The 11-inch board sits atop a 34 x 34 stud frame and contains 64 black and white tiles that make up the checkered squares. The pieces are small and can sometimes be finicky, although this adds to the sense of accomplishment you feel knowing just how much hard work has gone into your set.

In addition to the 32 buildable chess pieces, fans can use one of the four LEGO mini-figures that come with the set in place of their kings and queens. The mini-figures are exclusive to the set and include a golden Severus Snape figure as part of LEGO’s 20-year Harry Potter celebration. Each character is made to the exact detail of their looks from the first film.

Our excitement about this set comes partly from the exclusivity of the collectible mini-figures, as well as the ability to replicate the film’s battle in exact detail. Players can mimic the magical game by smashing the chess pieces when taking them off the board which makes for more exciting gameplay.

Before playing another match, rebuilding your chess pieces is as easy as flicking your wand and using a simple reparo spell.

Although we love that the set caters to children and adults alike, the LEGO parts are small and so should be used with supervision for children under the age of 10.

For fans of the Harry Potter series and chess, our list of top picks for Harry Potter-themed chess sets has it all. Whether you’re a fan, a collector, or just a chess enthusiast in search of something new, these enchanting sets will immerse you in the fantastical world of witchcraft and wizardry.

While we love the Harry Potter Quidditch set for its overall quality, durability, and ornate beauty, a true witch or wizard only needs one thing to recreate the magic of the Harry Potter universe: imagination.