When it comes to playing chess, nothing offers a boost of intensity quite like having your game timed with a chess clock, and you need to have a reliable clock that you can count on.

The Best Clocks For Chess (Our Review)

This digital chess clock was given the title of “Official FIDE Chess Clock” in 2008 after being tested by top-level arbiters.

It’s been upgraded since it was first introduced in 2007. The second-generation model comes with added features such as dark blue buttons that make it more pleasing to the eye and functions for Scrabble so the clock is compatible with a wider range of games.

You’re no longer limited to chess, and can include Canadian and Japanese byo-yomi in your rotation.

It has time functions such as Fischer random chess and the Bronstein delay, which grants you a bit of time before running the clock. This allows you to continue the game without the threat of having to forfeit due to time constraints.

The way it goes about the Bronstein delay is a bit awkward, though. Instead of delaying the clock for your allocated time allowance, it just adds your extra time to your total amount.

The various time functions show that while the chess clock is ideal for tournaments, it’s great for a casual chess game as well.

This version of the clock has a larger monitor than its previous incarnation. With an easy-to-read digital numbering and uncomplicated programming, it’s plain to see why this is considered the best chess clock by the FIDE (World Chess Federation).

The INSA Wooden Mechanical Chess Clock’s old-school wooden design combined with its uncomplicated functions makes it a popular option for casual players who just want to enjoy a classic game of chess.

It’s a little limited in terms of its functionality. It doesn’t come with a time delay and the time can only be counted down. It incorporates a wind-up system that’s able to keep the clock going for quite a long time based on how much you wind it.

The clock’s limited functionality makes it unsuitable for US Chess Federation rated playing and tournaments, but it’s still a fine analog chess clock to use for a casual game or two.

This mechanical chess clock has a solid light wood body that frames a large, clear display with 2 analog clocks. The display is large enough to easily read at a glance and has a last-minute indicator to alert players when their time is running out.

The wooden body does a good job of protecting it, and it would look great alongside a good wooden chess set. European-made mechanics ensure that this classic chess clock will serve you well during your casual games for a long time.

Easily one of the best digital chess clocks out there, the DGT 3000 comes with a variety of extra features that’s made it popular amongst seasoned players.

It has a large display that gives information such as which period you’re in, which setting is in use as well as the color of the player on each. Additionally, unlike many other DGT chess clocks, it has a timer that shows you the total amount of time spent during your game.

For players who like to play fast and rough, slamming the buttons in the heat of the moment would be risky with this clock since the plastic frame is quite light and could be susceptible to damage if treated too roughly.

This can take away from the excitement of a gripping game of blitz, and you’ll have to be careful handling it.

The settings are easy to work with and feature functions like blitz chess as well as other delay functions like the Bronstein delay, US Delay, and Fischer random chess.

It also has various tournament modes. 5 additional slots are customizable so that you can make your own settings according to the type of game you want to play.

This chess clock can be hooked up to any of DGT’s electronic chess sets as well, allowing you to use it to play online using the compatible chess software.

It also has a limited edition model to celebrate DGT’s 25th anniversary. The limited-edition model sports a plastic frame with wood print, which makes it more pleasing to the eye and looks sharp alongside wooden chessboards.

This small chess clock is affordable and easy to use, making it ideal for chess clubs and schools.

The minimalist design and uncomplicated functions are great for beginner players wanting something that has all that’s required from a chess clock, in a nice and portable size.

Along with its initial simplicity that draws people to it, it has a host of different functions that make it a versatile timer. It has both a count-up mode and a count-down mode.

It doesn’t have extra setting slots for making your own settings, but it does allow you to edit the pre-programmed settings on a per-session basis.

While the user manual makes setting up easy enough, it doesn’t cover how to reset the clock. Most people end up having to switch it off and on to reset the game timer. This oversight is a little confusing, seeing as this clock has been in production for years, we expect that they would have fixed this by now.

It doesn’t have a delayed time setting. Instead, it offers bonus time, which goes against tournament regulations. This clock is best suited for casual use by beginners.

The frame is made of ABS (acrylonitrile butadiene styrene) which is sturdy and resistant to physical impact, which is good considering the abuse clocks could be put through. It also has padding beneath it to help keep it in place.

All in all, it’s a sturdy little clock with some great features and is easy to use. There are a couple of design flaws here and there, but for casual chess players, it’ll be more than adequate.

One of the go-to tournament clocks for serious chess players, this is one of the most trusted chess clocks out there because of its reliability.

The Chronos GX has a strong metal frame which is the key to its ability to take a beating. The Chronos GX’s strong frame, large buttons, and easy-to-read numbers are great for fast-paced games where the clock could be subjected to the physical force of players in a hurry to push the buttons.

The numbers on the digital display are large and easy to read at a glance. This makes it an ideal option for speed chess and blitz where players can’t afford to spend valuable seconds trying to figure out how much time is left.

If you’re not rushing to push the buttons, a simple brush of the touch-sensitive knobs would be sufficient.

The design of this digital chess clock could be better. It comes in different colors, but it lacks any real design sense or character to make it stand out against the competition. More thought could have been given towards the aesthetics, as it’s something that a lot of people take into consideration.

This is for those who want something durable with all the necessary functions and can be trusted to last a long time after many intense games.

This foldable chess clock is conveniently portable and fits easily in your pocket. The extra convenience goes along nicely with an equally portable chess set.

Apart from being portable, it also comes with many handy functions. It has a count-up and count-down function, a time delay, bonus time, and is also able to generate Fischer random chess positions.

Fischer random chess, also known as Chess960, is when starting positions are randomly set up.

The weak input of the timer buttons is a bit of a pain. You need to apply lots of pressure and use all your fingers to make sure the center of the pad is pushed. This could waste precious playing time.

With this DGT model, you can pause the timer and adjust it to your liking, all without having to turn it off or reset it.

The timer will be reset if you close this clock, with no way of saving your time. This could become an inconvenience if you’re playing on location and need to move somewhere else, given you also have a magnetic chess set that’s able to save your game. 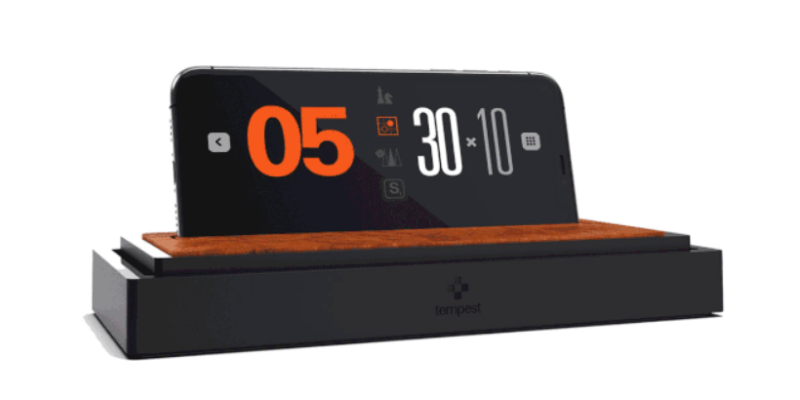 If you prefer a more modern approach to chess clocks, then the Tempest Chess Clock is worth a look.

The Tempest is essentially just a well-made base for your smartphone, onto which you’ll need to download the tempest chess clock app. The app is free, but to use it you’ll need a special code that comes with the base.

It works with your smartphone by incorporating a tilt sensor. When you hit the base of the leather pad, the pad holding your phone tilts and activates one of the 2 clocks shown on the screen.

The pad has a sound canceling material on the base that offers a gentler sound when it is hit. If you’ve ever played a particularly intense game of blitz, you’ll know how vigorously you can end up hitting your timer, so muffling the sound will really help.

The app has all the standard time controls and presets that come with regular chess clocks. It’s easy to understand and doesn’t require complicated programming to get the setting you want.

You have the choice to choose between a digital clock or an analog clock. The analog clock is precise with its timing and has a little digital clock as well, so there won’t be any uncertainty of exactly how much time you have.

Whether you’re looking to raise the stakes in your casual games or planning to compete in tournaments, it’s good to have a reliable chess clock at your side.

When selecting a chess clock, be sure to pay attention to the materials, functions, and other important features so that you can get a chess clock that’ll satisfy your needs and will be able to stick with you for a long time.